Your group runs an autonomous food delivery company called Guavabot. Everything is going great - you just raised $10 million in VC funding, and you've deployed to three locations worldwide - Singapore, Tel Aviv, and Toronto. Unfortunately your intern ran rm -rf / on your production servers, losing the locations of all your bots! The bots took quite a while to develop and the prototypes are valuable, so you want to locate them and move them home. Thankfully, you have a worldwide network of students who report the locations of the bots to you via app, but these customers are not always right and may incorrectly inform you about bots' locations.

You have some number of bots lost in the city. Your goal is to find these bots and move them home in the shortest time. You have two operations, both that take some time: remote and scout. A remote moves all bots from a vertex to a neighbour of that vertex. A scout sends a student to a vertex and has the student report if a bot is there.

Formally, your delivery system is for a specific city, i.e. a connected weighted undirected graph G = (V, E) such that all edge weights w_e > 0, with a designated home vertex h \in V. The Guavabots live at a set of locations L \subseteq V with exactly one Guavabot in each starting location; but you do not know this set of starting locations. In addition, you have a set of k students that you can send to vertices on the graph to inform you if Guavabots are present there; however, the students are unreliable and are incorrect on a fixed, unknown subset of vertices.

You do not know the starting locations of the Guavabots L or the opinions of the students (until you ask for them by scouting).

You get the bots home by performing a series of actions of your choice. Your available actions are:

You can only perform one action at a time, and you cannot "undo" an action.

We call an instance of this problem and the sequence of actions you take a "rescue".

Each student i can give you a report on any vertex so long you haven't used it in a remote already. If a student is incorrect on a vertex, they will always report the opposite of the truth; students are incorrect a fixed, but unknown number of times. This means that for each student i, there is a fixed, unknown subset S_i \subseteq V of vertices that they will be wrong at. These sets S_1, \ldots, S_k are fixed for the input, meaning they are completely determined before your rescue even starts; in other words, the student opinions will not change depending on how your algorithm runs.

There are no guarantees on how correct the students will be beyond the fact that |S_i| \leq |V|/2 for all students i. It is up to you to come up with an algorithm that uses the student reports as effectively as possible.

Time is measured as follows:

The scout cost 1 is much smaller than most edge weights w_e.

You are given a score once you end the rescue. If the time taken so far is t and the number of Guavabots that are home is g, this score is:

where \alpha \sim 10^3 is a constant among all inputs which is yet to be determined, but is within an order a magnitude of 10^3 and is about the raw time of an average solver that gets all the bots home.

This scoring function was designed such that returning more bots is always better than spending less time. For example, say that we have 5 bots scattered on a graph:

Another way to see it: treat your score as a tuple (g, t). Scores will be ordered by g descending first, then by t ascending.

Consider the following simple example, with 2 students, 2 bots, and 5 nodes. Vertices with bots are labeled B, and the home vertex is labeled H. The two letters above the vertices represent the opinions of both students. Assume all edge weights are 100: 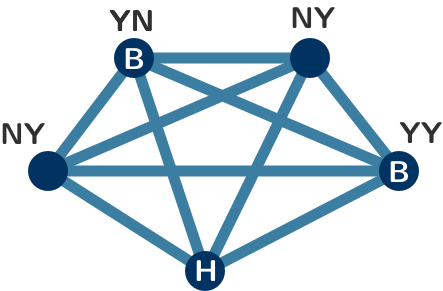 Try to see how if you follow the students' opinions, you can learn more and get a higher score.